Of whom I am the worst

This article is based on FLTLT Scott Minchin’s presentation at the 2017 MCF Forgiven Seminar and is also published in the Nov 2017 edition of Crossfire magazine. To gain a copy of the magazine please digitally access it here or contact the MCF Office to request physical copies. 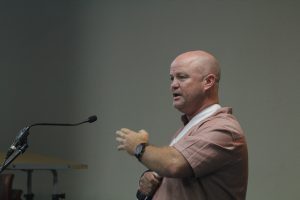 1 Timothy 1:15 (NIV)
Here is a trustworthy saying that deserves full acceptance: Christ Jesus came into the world to save sinners—of whom I am the worst.

I’ve gone to some songs to illustrate some points.

The Devil’s been Talking, 2011, Need to Breathe
Bag of bones and blood red cheeks,
Guilty from the words I speak,
Say the truth will set you free,
But it won’t for me,
Oh, the devil’s been talkin’.

Who tells us we can’t be set free? – the devil; the enemy. What’s that truth that sets you free? Back to 1 Timothy 1:15, the true statement – you are forgiven, the truth is forgiveness, that through Christ you are forgiven and free.

This freedom through forgiveness is not freedom to go, ‘okay I can do the wrong thing’ – what it is freedom to do is to let go of the baggage that holds us down, knowing we are forgiven.
1 John 1:8-10 (NIV)
8 If we claim to be without sin, we deceive ourselves and the truth is not in us. 9 If we confess our sins, he is faithful and just and will forgive us our sins and purify us from all unrighteousness. 10 If we claim we have not sinned, we make him out to be a liar and his word is not in us.
It’s a constant relational process with God – we continually bring to God our failings and weakness for forgiveness and then we go out – living this forgiveness out. How are we forgiven? By grace – anyone, anytime, anywhere. It’s not hidden or denied. “Forgiveness is not an occasional act, it is a permanent attitude.” Martin Luther King Jr.

In connection with the song The Devil’s been talking, I like this quote:
“So next time Satan wants to remind you of your past you probably want to remind him of his future.”

God’s grace is enough for the least and the worst of us.

A few years ago I got my friend Stan Longinidis to talk at an MCF Seminar and I introduced Stan saying he’d had 101 fights for 88 wins, to which Stan replies, “and seven highly controversial losses” and it’s probably true.
However there’s no such thing as a close points decision in sin. I’m either here or I’m there; sinning or not sinning. Every time I am short tempered with my family, every time I’m impatient, every time I look lustfully at someone else, every time I do these sorts of things I can’t say, “That’s not too bad a sin.” It’s a sin. Just like Paul, I’m the worst. Failing is failing and I am the worst.

As we think of how this grace is enough I want to have a look at some examples of confronting forgiveness of the worst.

King David
David’s jump to fame was sudden. It is like it is his first bout and he knocks out the undisputed heavyweight champion. No working his way up the ladder. He is suddenly in the big leagues. He’s blessed and he’s anointed. Yet we see him act manipulatively and Machiavellian in his pride in the Bathsheba incident. He already has multiple wives at that point so it is not like he hasn’t had a fair choice. Then on top of it all he does a pretty cowardly deed, sending the husband to the front line and getting them to withdraw. Adultery, murder, intrigue and wickedness – it’s all there. Yet even after all this King David was not condemned was he?

He had clearly deceived himself, and yet we can do the same thing. When one flirts with someone and they just think, ‘I’m just keeping my skills up.’ It is not okay; we deceive ourselves with our sin. We can’t look at others and say, “I’m not as bad a sinner as that person so I’m alright” It’s not alright! At the end of the day David is led to repentance and back to God’s forgiveness (though there were still consequences he had to face from his sin). David is described as a man after God’s heart and his genealogy leads us to the ultimate forgiver Jesus.

Paul
1 Corinthians 9:26 (NIV)
Therefore I do not run like someone running aimlessly; I do not fight like a boxer beating the air.

Paul is the writer of 1 Tim 1:15 that I keep referring to. He knows what it is to be the worst, yet he finds forgiveness. He knows Christ Jesus came into the world to save sinners like him – the worst.

We will now also look at some more modern examples.

Jeffrey Dahmer
Jeffrey was as bad a serial killer as anybody gets. What Hannibal Lecter was in Silence of the lambs Jeffrey Dahmer was worse. He had massive mental health issues and was by all accounts a bad serial killer (not that there are good serial killers).
In prison he finds prison ministry. He converts, gets baptised and starts reading the Bible. He does end up getting killed by another inmate but I think this confronts forgiveness. Just take a moment to consider this question, ‘When we meet each other in heaven, do you think that Jeffrey Dahmer is going to be there?’ Of whom I am the worst that’s where forgiveness is found.

Charles Colson
Charles was one of the Watergate seven. He was known as Nixon’s hatchet man and was jailed for obstructing justice. He also became a Christian in prison. He said that one of the reasons he became a Christian was that the Watergate conspiracy proved to him that the idea that the apostles just made everything up and conspired to deceive people was shown to be ridiculous. If seven people couldn’t keep Watergate secret, then how are all these disciples going to keep their story straight especially when stones are raining down on them? That would have been the time for them to put up their hands and say it had all been lies. But it’s true.

So Charles converts in prison and his Prison Fellowship International has become the largest outreach to prisoners. One interesting thing about prison outreach in terms of recidivism is that it’s 2½ times more effective than the non-faith based programs in preventing recidivism. Another example of the worst finding forgiveness, redemption and rebirth. No one, even I as the worst, is out of the reach of God’s forgiveness

We come back to 1 John 1:9 (NIV) If we confess our sins, he is faithful and just and will forgive us our sins and purify us from all unrighteousness.

Heaven in the Real World, 1994, Steven Curtis Chapman
Where is the hope,
where is the peace,
that will make this life complete,
for every man, woman, boy, and girl,
looking for heaven in the real world.

We have hope in forgiveness, peace in the truth. I like the concept of heaven in the real world against what Malcom X said – “the big problem with the Christian faith is we only get something when we die.” But that’s not true. We get the truth of peace and forgiveness now; here and now in the real world.

I’ve been a sports chaplain for the Queanbeyan Tigers since 2014 and I’m equally as passionate about this as I am about my full-time job. There’s a real opportunity to meet people there; footy is a community. When you look around there are all sorts of people. There are men, women, there are able and disabled, there are black, white, Asian, all sorts. There is a community ultimately looking for forgiveness and values. In some ways it is the meeting place where church used to be.

With the club we have kids who come from 16-17 and they are finding themselves as young men and women; finding their values and friendships. Most of them haven’t heard of this faith thing and there’s a real opportunity to speak into their lives. As chaplain I can’t proselytise, but I can help by showing them about forgiveness.

As an example a player got hit hard behind the play, completely and utterly unfairly. It was serious enough that he’s had to have dental work. He can’t play and he’s got this rage, so he comes to me. He’s got all these issues and he’s swearing his head off about wanting to get the guy that did this to him. And that’s natural too. I talked to him about the time that I got BRIG Fortune to speak to the club – the game was coming up where we were going to play these guys again who had not played fairly. There was talk of revenge and getting cops and BRIG Fortune talked about a specific instance in Afghanistan where we’d been on the receiving end of combat and the feeling of that particular group was to go out and flatten the whole village. But you can’t do that because you are turning you back on your values. In a sense you are forgiving.

I worked through this with this young guy. How he could forgive himself and address his self-worth. How he could forgive that player and move on. And he did move on and is now playing seniors footy and will probably get to play in a final because he’s been forgiven. His mum and dad say thanks when they see me. Now I haven’t gotten this guy to church but one day he’ll get married and look to get a minister. God knows where these small moves could lead.

Player no 2 changes clubs, receiving lots of sledging and threats. I spoke to him after the game and he was broken down in tears over this. We talked about forgiveness and how he needed to forgive himself for changing clubs and needed to forgive the guys who were being horrible to him. They can’t hurt him now because he’s forgiven himself – he’s let that go. This year he’s now one of the club captains. He’s moved from this place of brokenness to a place of forgiveness and can help now lead other people through it also.

I’m a first grade runner (in AFL the runner delivers messages to the players). In a lot of cases you meet that person at their lowest because they just stuffed up royally and you go to take them off the field. And you know what they say? “I wish the ground would swallow me up.” Or, “I’m the worst footballer in this team, no-one will want to talk to me”. They walk to the end of the bench and sit down so you know what Chaplain Minchin says “Practical Forgiveness – in the next 5 seconds what are you going to do? It’s gone. Let that go. Forgive yourself.” And we talk though this forgiveness piece and that’s not proselytising to them which is pretty strict in sports chaplaincy.

Our job is about moving people to the right. In a secular world where people don’t understand faith if we can give them a nudge towards faith, then the results can be amazing. Some like me might take a while to get nudged. Helping people understand forgiveness is moving them right.

If we talk Colson, Dahmer, King David, or Paul, or we talk these kids from the footy club, or the guy I drag from the field – they learn that they are never beyond repair. Nothing is too big to forgive. It does not matter if I’m the worst or the biggest failure because I’m forgiven in Christ. Nothing in my past can keep God from loving me.