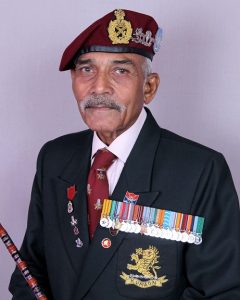 In most modern armed forces there are principles of leadership which have parallels to the principles of leadership enunciated and followed by Jesus 2,000 years ago. Jesus’ leadership remains not only unique but unparalleled. Similarly, many ‘tenets’ of military leadership have withstood the test of time over many centuries and remain unaltered to this day.
In the armed forces a leader is ‘blooded into battle’ by ‘enemy fire’; Jesus was tested and tried by Satan in the wilderness (Matt 4). In the armed forces a young leader commands a close knit team of nine or ten; Jesus started his ministry with four simple fishermen: (Matt 4:18-21), which grew to twelve who were his inner circle (Matt 10:1-2).
In the armed forces a leader may reach the highest rank after 40 years and ends up commanding many troops. Jesus’ ministry reached its zenith in about three and a half years with a countless following in the first century itself. In the armed forces and the political world a leader fades away and is seldom remembered after a few years except in history books and on anniversaries. Jesus is alive today and his following has grown to about three billion and is increasing every day.
God’s word is a manual for military and spiritual warfare. I now wish to look at eight principles of leadership which apply on both battlefields today. 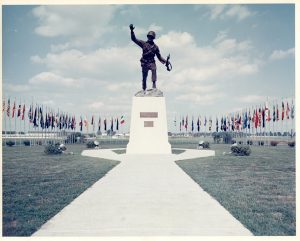 This is the ‘Follow Me’ insignia of The School of Infantry Warfare at Fort Benning: Georgia: USA

First Principle: Leading upfront: “Follow Me”
• This can be called the mother or cardinal principle of military and spiritual battles. It was expounded by Sun Tzu and the essence is that the personality of a leader, leading upfront, makes the difference between defeat and victory.
• Jesus gave this principle at the very beginning of his three and half years of power packed ministry (Matt 4:19). Then he made a commitment of the outcome of this principle: ‘I will make you fishers of men’.
• In military warfare the commander gives an assurance of doing something for those who follow him: he will not let them down. Jesus assured his followers that he would be with them through thick and thin and as the scriptures tell us he never let them down: he saw them through the severest storms during their ministry.
• Ask any battle hardened military commander if he will allow his men to follow someone else in war. I wonder how General Patton would have reacted to such a question?
• When the time came for the chosen nation to enter the promised land, YAHWEH selected Joshua as the military and spiritual leader: look at the mighty assurance that the Supreme Commander gave to his chosen warrior (Josh 1:3-9).
• In 1971 when India went to war against Pakistan, to liberate what is Bangladesh today, I was a newly promoted company commander. All officers received a personal communication from General Manekshaw, the Army Chief, who was promoted to Field Marshal after the war. It read: “All I want is for you to follow my directions and victory is yours.”
Second Principle: Vision and mission
• This is a foundation principle of leadership in all armed forces, even in terrorist organisations. All sides need a vision and mission that they are fighting for.
• Jesus was a visionary: he was sent to establish a kingdom for his Father (Matt 4:17; John 4:34; John 17:4). Regardless of obstacles, condemnation, persecution and distractions he continued on the mission given by his Father (See especially John 17, this is brilliant). We are reminded that where there is no vision, the people perish (Prov 29:18).
Third Principle: Personal Directions of the Supreme Commander
• In military warfare there can never be victory without the personal directions of the Supreme Commander. Leaders like: Channakya, Indian strategic philosopher and political scholar of 4th Century BC; Alexander the Great, ancient Greek warrior and King of 4th Century BC; Sun Tzu; Field Marshal’s Montgomery; Rommel; Generals Moshe Dayan, Eisenhower, Patton, Slim; Sir W Churchill and so on. Each one was known for direct personal communication of mission.
• In spiritual warfare we see YAHWEH’S personal directions to his selected servant Moses (Ex 33:11) and Jesus’ personal directions to his chosen disciples (Matt4:19; Matt28:18-20).
Fourth Principle: Diligence
• Essentially it means: earnestness, determination, focused on mission, obedience and courage of conviction even to the point of being audacious for the right principle and cause.
• A great demonstration of diligence and audacity in military warfare goes back to 200 BC when Hannibal crossed the Alps on his elephants, from Carthage and invaded Italy. There are innumerable examples in the armed forces where such traits of diligence find reflection.
• In spiritual warfare the first example is right at the beginning of the Bible: please have a look at Noah’s diligence, obedience and earnestness against all odds (Gen 6:22); further down the centuries we see Ezra 3:11; 5:8; 6:12, 13; Neh 6:1-9; Matt 4:19; Heb 6:11; Tit 1:9; 2:1; 2 Tim 1:1-14; 4:1-8; Prov 10:4; 13:4; 21:5. Paul’s missionary zeal and battle with the Roman authorities makes super reading (Acts 26:24-29). Look at Jesus’ diligence and obedience (John 6:38). Paul told the Philippians to be diligent and thoroughly committed to the Lord (Phil 2:5).
Fifth Principle: Respect for law and submission to authority

• The history of military warfare history is replete with examples where an invading and victorious force has been inhuman and unjust to the point of outright disregard for the rule of law and rules of engagement (all’s fair in love and war!)
• During WWII General Patton was severely reprimanded by General Eisenhower, the Supreme Allied Commander, for violating this principle.
• The Geneva Conventions were framed in 1864 and further on three other occasions up to 1949. The Westminster Manual of Law came into effect to honour this principle of military warfare. Interestingly this manual was framed with the backdrop of the Bible (Rom 12:14 and Rom 13:7).
• In 1971 the Indian Army took 96,000 prisoners of war during the Indian –Pakistan War; they honoured this principle to the hilt.
• Jesus said, “I came not to destroy but to fulfill the Law” (Matt 5:17-18) and “Give to Caesar what belongs to him and to God what belongs to God” (Matt 22:21).
• Jesus’ personal example of submission to authority stands out beyond compare, ”Not as my will but as thou wilt” (Matt 26:39) and “Father into your hands I commend my spirit” (Luke 23:46).
Sixth Principle: Wear down the enemy by a continuous process of attrition
• This principle was also enunciated by Sun Tzu and is one of the strategies being followed by ISIS and the international army of terrorists. We are experiencing an attempt by them to exert severe pressure on the security forces in all the target nations, to the point of disrupting, if not destroying, normal social life.
• Currently we are also witnessing China and North Korea hell bent to ‘test out’ the resolve of the international community.
• In spiritual warfare we find Jesus was constantly being attacked by Satan in the hope of wearing him down into submission (Matt 4:1, and right up to the cross in Matt 27:42).
Seventh Principle: Blow hot, blow cold: lukewarm in commitment (the opposite of diligence)
• There is no way any military force can succeed in battle without the total commitment and diligence of all ranks. It is not a game of just ‘numbers’ on the battle field: it is a question of few dedicated rather than many ‘lukewarm’. In recent times take the example of the ‘Entebbe Raid’ by a handful of die hard Israeli commandos who executed an audacious air assault hostage rescue mission in Uganda.
• An excellent example of this principle is in YAHWEH’s directions to Gideon, a man of valour. He was specially selected by the Supreme Spiritual Commander (Jud 7:1-7). In our daily spiritual battles Satan continues to fight non-stop to destroy believers who are half-hearted and ‘lukewarm’ in their faith (John 10:10). Paul is telling us to put on the complete ‘armour of God’ to defeat the devil (Eph 6:11-18) and not to be complacent (1Pet5:8).
• Jesus gave his warning for those who are weak in their commitment to ‘follow him’ (Luke 9:59-62). In Rev 3:15-16 a clear and stern warning has been given to the church at Laodicea.
Eighth Principle: Unconditional obedience verses disobedience and stubbornness
• These are two sides of the same coin; the former is a positive contributor to leadership while the latter is a negative and dysfunctional attribute. In the armed forces of any country, this is one principle which is followed to the hilt and for good reasons.
• In some military systems ‘obedience’ gets translated to mean ‘subservience’. Spiritually, it means the highest commitment and love for God; yielding to his will and not stubbornly following our own.
• We witness in 1 Sam 13:14, King Saul’s disobedience and the consequences during the battle of Gilgal against the Philistines. Obedience is one of the principles which is reinforced in the scriptures over and over again; Jesus himself spoke about obedience (John 6:38).
• With disobedience is stubbornness: doing what we seek to do and according to our own will. Military history has many examples of stubbornness being the cause of downfall of some glorious commanders (General Patton in WWII and General Petraeus while in command of the allied forces in Afghanistan more recently).
• Take a look at Jud 2:11-22 and enjoy reading a spiritual example of this principle.
Friends may God bless each one of us.