Is it possible to be a faithful follower of Christ in the Military and in Politics?

The following article is based on the talk given by Andrew Hastie, MP for the 2017 Defence Christians’ Dinner. It is published in Crossfire magazine #29. To gain a copy of the magazine please digitally access it here or contact the MCF Office to request physical copies. 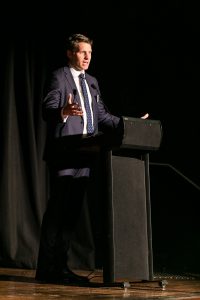 It’s often asked by well-meaning people who recognise that both soldiering and politics involves tough decisions that can leave you with sullied or dirty hands. The short answer is yes. It is possible to live a faithful life—it’s part of our calling. Indeed there is no prohibition against soldiering or politics in the Bible.

Soldiers and statesmen in war face grave decisions, often choices that involve terrible consequences. We can bring salt and light in those moments: justice, a proper sense of the magnitude involved in the taking of a human life and compassion.

This is where I’m going to go tonight with this speech. First, I’ll discuss Christ’s interaction with soldiers in the New Testament. Second, I’ll suggest Augustine’s framework for thinking about war as the best way for dealing with dirty hands in war. Finally, I’ll put to you that Christians can offer a model of integrity built on love, sacrifice and courage in both the military and in politics. You can be salt and light in dark places and in dark times.

Now the gospels are historical documents and, like any historical document, they are selective and not exhaustive. That is not to say they are incomplete but rather that they highlight the key points of Christ’s life on earth. Not even Charles Bean, as exhaustive as he was in the official history of WWI, comes even close to capturing every moment in the First World War.

So I always find it curious that when you go through the gospels you see several mentions of Roman soldiers and their interactions with Christ. We see in Matthew 8 and Luke 7 the story of the Centurion who has the very sick servant. He comes to Christ seeking him to heal his servant. Note that he was a Roman, an enemy or a subjugator of the Jewish people. Jesus does not condemn him but rather marvels at his faith and commends him. Jesus says: “I say to you I have not found such great faith not even in Israel.” Jesus remained silent on his vocation.

Likewise when Jesus encounters soldiers in Luke 3 they ask him: “what shall we do?” And he replies “Do not intimidate anyone, or accuse falsely and be content with your wages.” Once again Jesus is silent on their vocation but implores them to be just and not whinge.

Soldiers need a proper view of the world. They must take into account its fallen state and the existence of evil. Soldiering is a vocation that interacts directly with that reality. Therefore, it is a noble profession that demands men and women of integrity.

There is no prohibition on soldiering—in fact, our military serves the Australian people as part of the larger governing authority which protects and upholds the Commonwealth or common good of this country. In other words, your service is a blessing to many Australians in this country.

What about the dirty work that war involves? Many have deployed to Afghanistan, Iraq or other countries over the past decade and seen the death and destruction that war brings.

Augustine of Hippo reflected on this very problem in his great work The City of God. Augustine had a clear-eyed understanding of human nature and our sinfulness. Even at our very best, he argued that we are sinners whose sin contaminates our highest aspirations and our most noble actions. Augustine argued that although a Christian soldier may kill enemy combatants as a matter of true military necessity, we can never assume that in doing so, that we have not sinned.

I felt that truth to my very bones—to my very core—on operations where things didn’t go to plan and innocent people died. I know that Winston Churchill wrestled with this when he decided to sink the French fleet off the coast of French Algeria in 1940. France and Germany had only signed an Armistice a fortnight earlier under a French government led from Vichy. The British, particularly Churchill, were still reeling after Dunkirk and feeling betrayed by the Armistice and could not afford to see the French fleet used against them by the Germans. The British attacked, killing almost 1300 French sailors and destroyed the fleet. Churchill also wanted to show the Americans that Britain was prepared to go it alone and would make ruthless decisions in order to preserve the United Kingdom. Even so, Churchill wrote: “This was the most hateful decision, the most unnatural and painful in which I have ever been concerned.” It took its toll on him even though it was ultimately a just and necessary military action.

Consider also the controversial sinking of the Argentinian light cruiser the General Belgrano by the Royal Navy during the Falkland’s war in 1982. 323 Argentinian sailors went to the bottom of the ocean that day after being sunk by a nuclear submarine. There is controversy about the legality of that action as some argue that the ship was moving away from the exclusion zone put in by the Royal Navy. But I think there is a strong argument to be made for this action out of military necessity. Nonetheless, we encounter the concept of dirty hands yet again through the taking of life to protect life. Margaret Thatcher agonised about this herself and she said in a rather heated BBC interview a few years after the war that her main motive was to “protect the boys in our Navy”.

This highlights the challenge for soldiers and statesmen in war. The use of deadly force against another human being is generally sin, yet a failure or refusal to kill can be a worse sin in both intention and effect than a decision to kill in order to save lives.

It reminds me of CS Lewis’ analogy: if a man broke into your house and attacked your family it would be a greater evil to do nothing in defence of your family than to use violence against the intruder.

Augustine recognised this moral quandary and argued that the Christian should take a melancholy approach to war. They do not glorify it, nor do they ignore the realities of it. They have a realistic and sober approach to it. They seek to be just and compassionate in the discharge of their duties. So what does that look like? I think we can serve our nation both in the military and politics by being models of integrity built on love, sacrifice and courage.

I see integrity as congruence between our words and our deeds. Doing what you say you will do. Love is critical to integrity. By serving your country and by serving our Commonwealth, you love your neighbour—as Christ calls you to do. By preserving peace through preparedness, you love your neighbour. When called upon to fight to restore peace, you love your neighbour. Love is built on the principle of sacrifice, of pouring yourself out in the service of others. I think at the heart of any great nation is this idea of sacrifice–it’s what makes Australia and other western democracies unique. Is it any surprise that we see so many of our war memorials engraved with the words of Christ from John 15:13: “Greater love has no one than this than to lay down one’s life for his friends”.

Right now I think we are in the middle of a civilizational test. I think we have a stifling climate of political correctness in this country that can only be fought with truth and by people who possess moral courage. One historian wrote, “A great civilization is not conquered from without until it has destroyed itself from within.” I fear that our greatest challenge lies internal to this country.

We live in a very uncertain world and I do not think that we are being realistic about the sorts of capabilities and fighting culture that we need to maintain our Australian Defence Force. That’s why I repudiate the aggressive social engineering that has been taking place in the ADF, particularly in the Army. It is part of the reason that I got out of the military and I haven’t looked back. The greater fight resides within our culture. We need to be clear eyed about the facts. We need to push back against falsehoods and we need to lead with moral courage.

This is especially true in the military. Soldiers deal in hard facts. 60,000 Australians perished in WWI. Those men and women didn’t come home. Historians don’t dispute that. Decisions in war matter immensely. The military is no place for the latest academic fad or trendy political orthodoxy. We have lives at stake every time we send our people in the field. Commanders particularly need to be clear eyed about the threats they face and how they can defeat them.

Sometimes it is easy to go with the flow, especially in an organisation that prides itself on discipline, teamwork and coherence. You don’t want to be that person who steps out of line. But we need leaders who recognise the world as it is—in its fallen state—who love their country, who are prepared to sacrifice for it, who have the moral courage to speak the truth and make tough decisions.

To those serving, I thank you for your ongoing service to the nation. You have people like me watching your back in parliament. May you continue to be a blessing to our Commonwealth of Australia.