The joy of the Lord is your strength 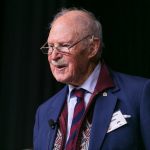 Rev Joe Mullins is a WWII veteran who shared a great story at the 2015 Centurions seminar. It was in his 20’s that a particular event changed the passage of his life.

It was 27 July 1945 when I was at a battle at a little place called Letpanthonbyn in Burma (Myanmar), north of Rangoon (Yangon). The Japanese were trying to get out of Burma into Thailand. It was during the monsoon and we were out on a fighting patrol the night before and we were trying to find out where the Japanese were. There were tens of thousands of them seeking to get out of Burma and to escape – mostly along the railway line because that was the only raised bit of ground with the paddy fields all around. While we were out on patrol we didn’t find them; they found us. They occupied the village that had been our headquarters.

When we came back the following morning, we were ordered by the Brigadier to retake the village. It was in that battle that I was commanding a company. We were to put in the final assault to drive the Japanese out.

I was commanding B Company. An artillery barrage was put down. Unfortunately, it landed in the lap of A Company, which demoralised them a bit, as you can imagine. We tried to get around the left flank but there was a banana plantation and bananas don’t stop bullets, so we came back. Finally, we put a number of assaults down the centre of the village. There was a Buddhist temple with a mud water tank behind it. The Japanese were dug in around the base of that tank. I was directing the attack from under a tree when a sniper in a tree targeted me. There was so much activity going on as I was directing the attack, I was quite unaware of what was happening to me personally.

One bullet entered the top of my helmet, ran round and came out the back. The path of the bullet can still be seen in the helmet. I was crouching behind this mango tree and the second bullet in the side of my helmet burst open, ran around inside and came out the other side. So it actually came in near one ear and out near the other. The third one ricocheted off.

My second in command was wounded and we had a number of casualties; we couldn’t get the Japanese out. Finally, I reckoned if we went around A Company’s front we could creep up under the bank of the tank and get around that way. By that time it was getting dark and unknown to me (the communications were not brilliant in those days) COL John Terry, our commander, had ordered all the troops back to the back of the village. There was just myself and three or four others left alone. I sent one of the men back to get some more ammunition. We’d had grenades but we’d run out. He came back and said there was nobody there. So we simply had to lie under the bank of that tank for the rest of the night.

Early morning, I can still remember the dawn creeping up, and the Japanese packing up all their gear and ammunition. Either they were going to come down to where we were or they were going to leave. By God’s grace they left.
Then “What to do?” because our men thought we had either been killed or taken prisoner, unknown. We decided to sing army songs like “Pack up your troubles in your old kit bag and smile” and walk straight down the centre of the village which we did. I can still remember the wide eyes of John Terry and the others when we united with them. John gave me a hug and said ‘We thought you were gone!’

As I began to relax, I suddenly felt my steel helmet weighing a bit heavy. I took it off and felt the top of my head. I was surprised to find a scratch, perhaps an inch long. I looked at my helmet; inside the foam rubber and leather crown were ripped to pieces. I pulled them out, revealing gaping holes and a dent where the Japanese bullets had penetrated the steel. The bullets had struck the helmet and spun around the inside curve of the steel before exiting the other side. The bullets had all been miraculously deflected from my head. We lost 25 men in that battle, 25 of our friends. As I gazed at the helmet, it seemed that God was talking to me, “Joe, you have no right to be alive. Your only right to live is to give yourself back to me”

I had been a bit of a back slider. You go with the flow so easily in the mess and in the army and it served as a real wake up call for me. Very easily you dismiss it and say it was my luck. I believe it was the providence of God. To ensure I wouldn’t forget it, I was in hospital for eight weeks because we’d been sloshing through the paddy fields and leech bites had gone septic on both my legs. Leeches get through the eye holes of your boots. It took 8 weeks to clear up.

God used this incident simply to get me to redirect my life. ‘Lord, what do you want me to do?’ That’s the story. I later went back to the UK, went to university and returned to India as a missionary. Finally, my wife and I with 6 kids, migrated to Australia and we’ve never regretted that.