A journey of leadership and discipleship 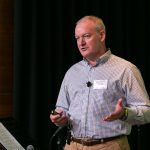 Those who know me well, know that I’m not a fan of personal publicity so let me explain how this has happened. The Rev Dave McLennan, one of our local parish priests, had been strong-arming me for the past 12 months to do this. I resisted, but Dave had higher connections than I have and Dave knew he’d eventually win. Also, he was not entirely without proof; as I occasionally feel the urge to put myself ‘out there’, as I did for the ADF video, “Faith Under Fire”, and publicly declare my faith in the hope that it might encourage others. So, this is a story of my journey with God and the rocky road it has been.

Both my maternal and paternal grandparents were strong Presbyterian Christians who lived in Ireland. They had significant influence on me, and to a large degree, shaped my approach to life, including how I behaved as a Christian. I was brought up in Ireland and Southern Africa attending church every Sunday and activities centred around the faith community, such as; Boys Brigade, Sunday school, school prayers, and as already mentioned, my grandparents were also heavily involved in the local church. My mother did attend church too and took us when we were young, but my father attended very little.

For those of you with a leadership role, you’ll know that it is often critical to ‘walk beside’, or ‘walk the talk’ rather than just advocating a particular philosophy. So, when my parents stopped going to church in Africa, and of course my grandparents were back in Ireland, I started to question why I was going. I was about 15 when I stopped going to church. About the same time, I started to seriously examine soldiering as a career. I always knew I wanted to be a soldier, every since I was able to have conscious memories – but all of a sudden it appeared possible. I had been in cadets in Africa and Ireland, and thoroughly enjoyed it, and all of a sudden I was three years away from finishing school and a military career seemed suddenly feasible.

I was 18 years old when I migrated to Australia with the rest of my family and I headed straight to the recruitment office in St Georges Terrace, Perth. The Warrant Officer at the front desk told me to come back in a year, as he couldn’t understand a word I said due to my thick Irish accent. So I went to university instead and started a degree in engineering. 12 months later I was back in front of that Warrant Officer and joined the Army shortly after. I spent my first seven years in RAEME with postings to Puckapunyal, Darwin, Broome and then, much to my surprise, I was successful on the Special Air Service Regiment (SAS) selection course in 1996 – some 12 years post my separation from God. 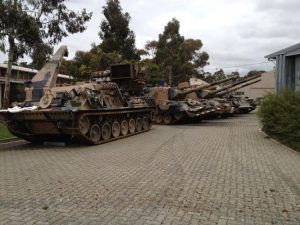 In 1999, as a SAS troop commander, I started back at church again a few times but not very often. I recall taking my eldest daughter to church at the Anglican parish in Swanbourne. Life was too busy and between training and operational deployments, career steps, moves and kids, it all became almost a bit of an inconvenient existence trying to be Christian. However, it is in times of higher risk, either real or perceived, that we are closer to God. I have always found that deployments bring me markedly closer than at any other time. I recall several occasions as a SAS troop commander, where through prayer and reflecting on the moral and ethical context of potential decisions, I was able to maintain operational momentum. I continued my occasional Christian contact throughout the next few years, with church while at home and when deployed, such as to the Solomon Islands and attending RAN church services on board a RAN major fleet unit. 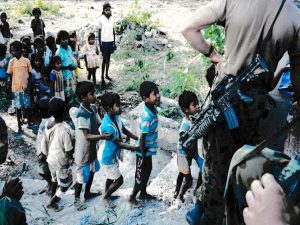 During this time a seminal moment came for me; my mother-in-law passed away. She was one of this world’s quality folk. She was a strong believer and, although brought up Anglican, she had become Brethren later in life. Her funeral was in May 2001 and the man who delivered her eulogy was from South Africa. He approached me during the wake and said, ‘you can’t leave this too late – you have to get involved now’. I was stunned, but knew exactly what he was talking about – he had touched on a nerve that I was aware of but had been ignoring for years. My time to become more involved had arrived and living the way I was and engaging with God when it suited me, or when it was convenient, was not being sincere to myself. 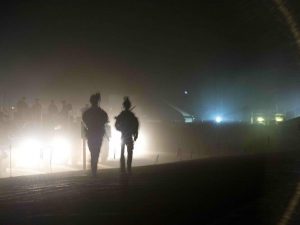 Preparing for an operation, Afghanistan

Then Afghanistan ramped up with 9/11. I was again deployed as a troop commander in the early period and returned to Australia in late 2002. This was a very difficult and dangerous deployment and no padre was deployed due to manning caps. I attended US military services with a couple of SAS types like myself. Deployments, bizarrely, were always opportunities for a more regular relationship with God. Immediately following this tour, I was posted to a staff position at ADFHQ and I was so busy with work and family that I slipped back into the comfort zone where being a regular Christian had again become inconvenient. In 2005 I left for a second tour of Afghanistan, this time as squadron commander. It was during this tour that I formed an enduring relationship with God again. For the first time in my experience, the force element was provided a padre and this, combined with the difficult mission, was a catalyst for many of the personnel on the deployment to attend regular Christian gatherings. On my return to Australia, I started at St Matthews, Shenton Park and have been a regular church goer ever since.

The 2005 Afghan deployment was quickly followed by one to Timor Leste, again as a squadron commander. There was no padre or organised services on this deployment so I had to keep it to myself. On return to Australia I was again looking at another deployment to Afghanistan, again as a squadron commander. There were a few hairline cracks starting to appear in my life and I didn’t want to deploy. Thankfully, with some prayer, someone else appeared and took the trip.

In 2007, the family was very grateful to have a break and the opportunity to go to Canada for a year on a posting. Here, for the first time, we began attending weekly church services as a whole family. We found a great priest and Christian community at St Timothys in Toronto.

On return to Canberra, we actively looked for a church for the family and found St Johns, Reid through its website. I took my second daughter one morning and she reported back happily to the other kids – ‘its ok, it’s the same drill as Canada, just a different location!’. We’ve been going there ever since. My faith has strengthened there and I find encouragement often from unlikely sources. Creating disciples is often about finding the point where you can leverage yourself to help others in their journey with God and a stable relationship with Christ enables that to occur.

On Boxing Day 2011, I began my last deployment as the commanding officer of Special Operations Task Group. This deployment brought me the closest I have been to God. I had a sense of responsibility for the task group members, which included Australian, United States and Afghan personnel. My routine involved going to chapel immediately after I got up and I found this a great way to start the day. On this deployment, for a change, there were three terrific chaplains as part of the tour – Pat Murphy, Dave Jackson and Steve Brooks. Padres are a great litmus test for the health of a unit on deployment, or in barracks, as they have the ability to speak to everyone and provide a non-biased view. 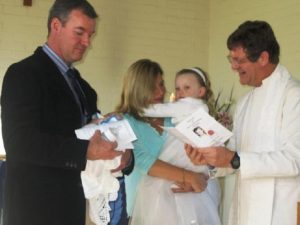 Padre Dave Jackson at a baptism

I would strongly advocate for padres on every deployment the ADF undertakes. If your moral and ethical compass is strong, it allows for tough decisions to be made against the back drop of Christian values. It is my experience that personnel will conduct themselves as they perceive their leadership will tolerate – and strong moral and ethical leaders with Christian values are key. Post sizeable combat events it was always interesting to see who attended chapel on Sunday.

On my last tour I faced not only questions of mortality but also other very life changing decisions. After much prayer and discussion with my wife, I made the decision to leave the military, a career that I loved. It appeared to us that God had other plans and we needed to stop fighting his decisions. It was very difficult at the time but almost a relief when the decision was made. The acceptance that God was in control was clear, no matter how hard I tried or what I thought I had achieved. The take away for me from all this was to spend time on big decisions and ask for help from God – it can take a few days, weeks or even months to sift through issues with prayer and counsel, but a way ahead will always develop.

Indeed, it wasn’t long before another pathway unlocked for me, in the form of running a small, now medium, business. It certainly hasn’t been easy but it has allowed me to continue to contribute into something that I believe is for the greater good. Furthermore, it has enabled others, like me, who also want to serve the community out of uniform, to continue to use their skills knowledge and experience in a meaningful fashion. The company mainly employs veterans, and emphasises the values of trust, respect, flexibility and humility, and although I don’t preach at work, my faith is known (and often tried!). It is hard to resist the slide back to complacency, being too busy, having too many competing agendas in daily life, but I can see clearly now that God has had a path for all of us even when we didn’t like it and its up to us to follow him, not the other way around.