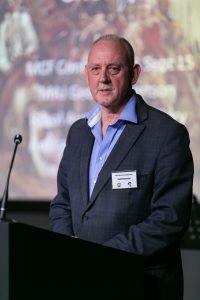 Disclaimer – This presentation is entirely about spiritual warfare and acknowledges that we are to submit to authorities in accordance with Romans 13:1

The unseen enemy doesn’t want you to read this. It strikes deeply to the heart of his centre of gravity when his strategies and deceptive tactics are revealed. We are going to proceed anyway because God has other ideas!

In the film Lord of the Rings when Frodo Baggins places the ring on his finger the screen turns to black and white and he becomes terrified as he sees the parallel world of spiritual darkness. I believe this is symbolic of the reality of the unseen spiritual world in which we live today.

When a person is born again, God takes the veil away from their eyes enabling them to discern the spiritual realm. Unless we are aware that there is an unseen spiritual world the enemy can defeat us whilst we are totally focused on operating in the physical realm. Some of us have come face-to-face with the physical enemy on the modern battlefield of today but all of us are situated on the spiritual battlefield whether we are aware of it or not.

Having personally been delivered from demonic spirits, early in my Christian walk, God has purposefully demonstrated to me the reality of the unseen and evil demonic world and also the awesome unlimited power of the Holy Spirit to overcome any of our spiritual adversaries. God has also blessed me abundantly by showing me personally many of the miracles recorded in the Bible. Accordingly, I believe that every time we gather together in the name of Christ we are like the World War 2 Supreme Headquarters of the Allied Expeditionary Force commanded by U.S. General Dwight D. Eisenhower, gathering as a council of war but as a council of war against an unseen enemy.

If the enemy is an unseen spirit, how does he wage war against us?

Not everyone is aware of the fact that the battleground is in our mind. The enemy’s aim is to dominate our thinking with lies and deceptive thoughts that destroy our hope and our destiny. He continually whispers lies and deceptions in our ears, heart and mind.

Paul in Ephesians 6:12 gives us battlefield intelligence from as far back as 60 AD, ‘For our struggle is not against flesh and blood, but against the rulers, against the authorities, against the powers of this dark world and against the spiritual forces of evil in the heavenly realms.’

Notwithstanding, God’s Order of Battle (ORBAT) is far superior to the enemy’s ORBAT. Even though the enemy is an overwhelmed smaller force, he can strike against a larger force using deceptive operations.

Like the elephant that learns as a baby he cannot proceed beyond the length of his leg restraint without being hurt and as an adult is similarly constrained by his entrapped mind, the enemy aims to build strongholds in our minds that neutralize us.

God’s plan, the Commander’s intent, is to get his Kingdom back – he wants us to understand how we can defeat the enemy and that his ORBAT is invincible and undefeatable when we know how to rely on and have faith in him. God’s ORBAT compared to the enemy’s would be like comparing a fully bombed-up US Aircraft Carrier with a rubber dingy.

God wants us to know that the battle is his to win on our behalf, as we have faith in him, knowing that he has all the power whilst we have none. He wants us to access his power with our God-given power of attorney, given in Jesus’ name.

This is analogous with the JTACs (Joint Terminal Attack Controllers) who have no power in themselves but the authority on the battlefield to call in air, ground and naval firepower simply by an authorized call for fire over a radio.

The Principles of War

How can we employ the principle of co-operation? We need to stay mission‑focused against the adversary and not fight amongst ourselves. I recall one of our Major Generals saying “I am a Major General, and I fly at 50,000 feet because it is my job to be mission‑focused, on the big picture, to ensure we can defeat any adversary coming against our country”. We must keep out of the “weeds”.

Some priority suggestions to get on the offensive quickly – be baptised in the Holy Spirit, establish a prayer mountain, identify a wingman and commence training in thought‑to‑thought combat.

A Prayer Mountain field trip was conducted in Canberra in late 2015 following the seminar with participants personally experiencing how God speaks to people who seek his face.

“Faith Under Fire” is a DVD training series endorsed by the previous CDF GEN David Hurley, AC, DSC, and designed to facilitate soldiers, sailors, airmen and women to conduct a spiritual check prior to deployment. This excellent series is accessible via your local chaplain.

How to come under the protection of God

If you want to come into God’s love and protection and be equipped to defeat the unseen enemy check out Jesus.

He promises that if you seek you will find. (7)

“For God so loved the world that he gave his only Son that whoever believes in him should not perish but have eternal life “ John 3:16. (10)

Success or failure can depend on a personal faith that can sustain you under fire.

Socrates once said, “An unexamined life is no life at all”. Can I encourage you to call life a question and embark on a journey of discovery? (11)

Note: MAJ Robertson can be contacted on [email protected]